When Amazon bought Twitch, the story was that the new conglomerate would be more efficient and that would benefit everyone – streamers and audiences. That’s the story we hear about every anticompetitive merger, and it’s always a lie.

One major efficiency that the Amazon-Twitch merger was supposed to produce? Lower bandwidth costs. That’s one of the largest expenses associated with running a streaming service, after all, and Amazon Web Services is the 800lb gorilla of cloud computing. They’ve bought or built tons of infrastructure, and even for parts of the stack they don’t own, they are so big they can demand preferential treatment.

Hypothetically, cheaper bandwidth leaves more money on the table for the creative workers whose labor generates Twitch’s revenue, but that’s not how it’s played out. In incredible blog post explaining why Twitch is unilaterally canceling its highest-tier royalties, company president Dan Clancy blames the change on the cost of bandwidth:

With most streamers, Twitch takes half the money they earn. That’s a big chunk, which Clancy justifies by citing “continuous investments in the products and people that make your growth possible.” He describes some new features that have increased the revenue per audience member since Amazon’s 2014 acquisition of Twitch.

But for Twitch’s most valuable streamers – the ones it courted most aggressively – there’s a better revenue split: 70/30 (the worker gets 70%, while Amazon takes 30%). These are the deals that Clancy is unilaterally cancelling.

Clancy says it’s not fair that the company’s favored streamers should be earning more than the majority of streamers, which is a pretty good point. What he doesn’t explain is why the solution to that unfairness isn’t to just give all the streamers a 70/30 split – especially in light of all the new revenue he boasts about.

The major variable cost for Twitch – the cost that changes based on the number of streamers on the service – is bandwidth, which may be why Clancy blames the clawback on it. But this is weird. As Sam Biddle wrote, “Amazon is charging Amazon so much money to run the business via Amazon that it has no choice but to take more money from streamers.”

It’s not a very plausible explanation, especially when there’s a far simpler one sitting right there: Amazon is cutting the wages of its workers because it can. The streaming industry is highly concentrated, and Amazon is the largest player. It’s where audiences go to get their streams, so streamers who want to address that audience need to submit to whatever terms Amazon imposes. Whatever negotiating leverage creators were able to exert at the start of their tenure on Twitch has been incinerated by the growth of Amazon’s market-share, and so Amazon has torn up its contracts and handed those creators new ones.

There’s a name for an economic arrangement where there are just a few buyers, and they put the squeeze on sellers: a #monopsony. In the economic literature, monopsonies are considered especially dangerous because they are able to extract concessions from their suppliers far more easily than monopolies (concentrated sellers) can from their customers. Monoposonists who represent just 10 percent of their sellers’ business can start turning the screw.

Amazon’s pretty frank about this. In its own investor presentations, it describes its “flywheel”: bring in customers by subsidizing below-cost prices, lock those customers in with Prime, then extract price concessions from businesses that have to use its platform to reach those locked-in customers:

This flywheel is at the center of California’s antitrust case against Amazon, where Attorney General Rob Bonta argues that the company claims so much of its sellers’ revenues that they have no choice but to raise prices, and that those higher prices spill over to all retailers, thanks to Amazon’s “most favored nation” contracts:

For 40 years, the entertainment industry has grown ever larger and more profitable, even as the share of those profits going to artists has fallen and fallen. To solve this, legislatures have granted creators more copyrights – longer terms, lower barriers to enforcement, higher penalties for violations – and yet, the problem has only worsened.

There’s a reason for that: the major factor in suppressing creative workers’ wages isn’t copyright infringement, it’s monopsony. With four major publishers, three studios, three labels, one trade book distributor, one cinema chain, etc, there are innumerable chokepoints between creators and artists where giant companies can simply demand that creators hand over whatever copyrights they’ve been given, along with the lion’s share of the revenue those copyrights generate.

That’s the thesis of “Chokepoint Capitalism: How Big Tech and Big Content Captured Creative Labor Markets and How We’ll Win Them Back,” a new book that Rebecca Giblin and I have coming out on Sept 27 from Beacon Press:

Our book is split into two parts. In the first half, we unpick a representative sample of the scammy accounting practices and shade contracting terms that different tech and entertainment giants use to screw creative workers, from ad-tech to Spotify to DRM-based lock-in to the unbelievably crooked “packaging fees” that prompted every Hollywood screenwriter to fire their agents on the same day and embark on a grueling two-year strike:

In the second half, we address ourselves to detailed, shovel-ready, technical proposals to put the brakes on those anticompetitive flywheels and put groceries in creative workers’ fridges; proposals like declaring NDAs over accounting fraud unenforceable in California, Washington and NY, the three states where most creative contracts are signed:

This half of the book is devoted to structural changes, because market concentration is a structural problem. As we see with Twitch, even if you’re the kind of streaming superstar who can demand a 70/30 split at the outset, the instant a company’s market share lets it demand a worse deal for you, you will lose your premium.

One of the best moments in the development of this book was when an editor rejected it, saying he liked it a lot but was disappointed that all our remedies were about structural change, not actions individual fans and creators could take on their own. We were like, “He’s so close to getting it!”

Just like you can’t recycle your way out of the climate emergency or shop your way out of a monopoly, you can’t individually bargain your way out of a buyer’s market for your labor. This is a lesson that the labor movement learned a long-ass time ago, but 40 years of neoliberal brainwashing has left many of us unable to imagine that we’d act as a movement, rather than as a bunch of individuals.

But you know who hasn’t forgotten that lesson? The buyers for our labor – and for all labor. Everywhere we see private equity financiers buying up companies, loading them with debt, and paying themselves stiff “management fees”, the first casualties are the workers in those companies.

But after the workers are screwed over by monopsony, the new owners start to use their monopoly power against their customers – think of how Amazon used its investors’ cash to subsidize the price of goods, locking in customers, then charging its suppliers such high fees that they had to raise prices.

The last chapter of Chokepoint Capitalism describes how the plight of creative workers is part of a cross-industry sickness, where concentrated buyer power for labor hurts all kinds of workers. Creative workers are very vulnerable to this because people make art because they can’t help themselves, which means that companies can offer the most abusive contracts and still get takers (“What, and quit show-business?”).

But there are many such professions. Workers in the “caring industries,” such as healthcare, show up for their patients, even when their bosses are driving them into the poorhouse. That’s partly why private equity is so obsessed with buying up and merging hospitals – they know they can cut pay for healthcare workers and many of them will still report for work:

Rebecca and I are on the road with the book right now. Tonight (Sept 27), we’ll be at Beverly Hills Public Library, where David A Goodman – who led the Hollywood writers’ strike – will host us at an event jointly presented with Book Soup:

I’ll also be in Miami on Oct 12 at the great Books and Books in Coral Gables: 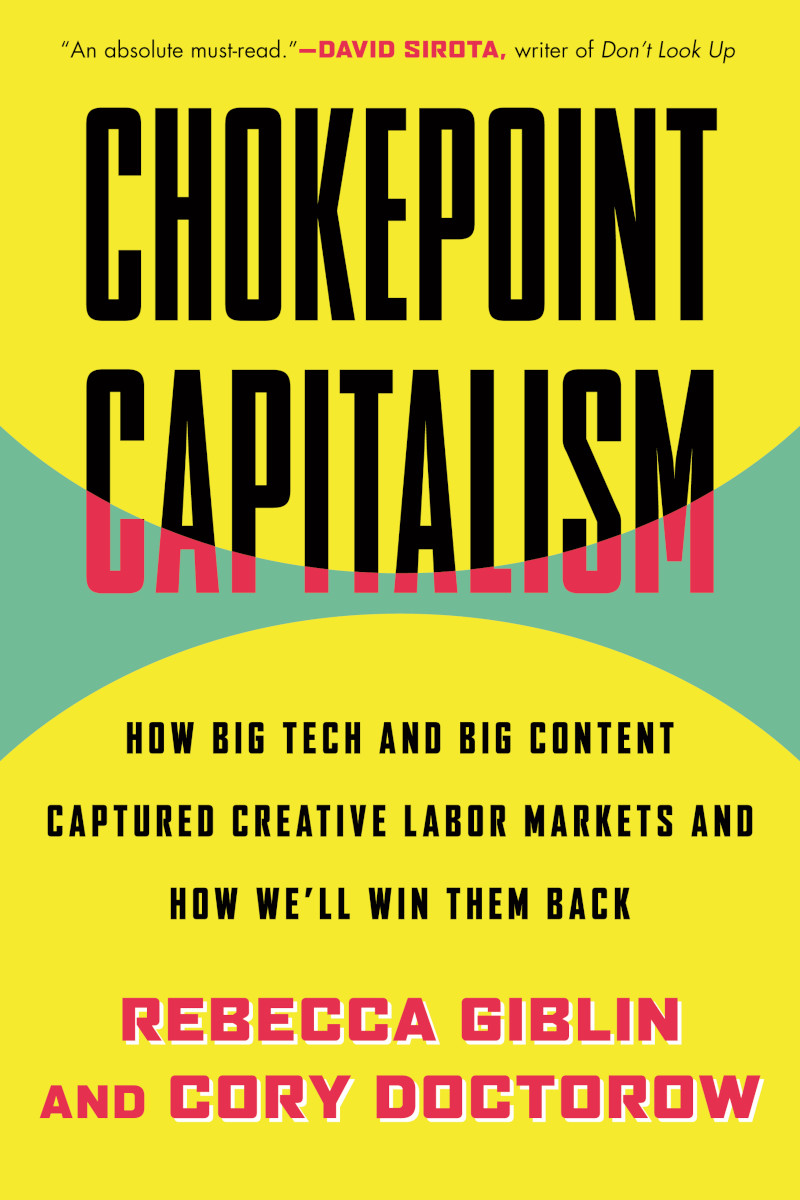