I have a favor to ask of you. I don’t often ask readers for stuff, but this is maybe the most important ask of my career. It’s a Kickstarter – I know, ‘another crowdfunder?’ – but it’s:

b) Potentially transformative for publishing.

Here’s the tldr: Attack Surface – AKA Little Brother 3- is coming out in 5 weeks. I retained audio rights and produced an amazing edition that Audible refuses to carry. You can pre-order the audiobook, ebook (and previous volumes), DRM- and EULA-free.

That’s the summary, but the details matter. First: the book itself. ATTACK SURFACE is a standalone Little Brother book about Masha, the young woman from the start and end of the other two books; unlike Marcus, who fights surveillance tech, Masha builds it.

Attack Surface is the story of how Masha has a long-overdue moral reckoning with the way that her work has hurt people, something she finally grapples with when she comes home to San Francisco.

Masha learns her childhood best friend is leading a BLM-style uprising – and she’s being targeted by the same cyberweapons that Masha built to hunt Iraqi insurgents and post-Soviet democracy movements.

I wrote Little Brother in 2006, it came out in 2008, and people tell me it’s “prescient” because the digital human rights issues it grapples with – high-tech authoritarianism and high-tech resistance – are so present in our current world.

But it’s not so much prescient as observant. I wrote Little Brother during the Bush administration’s vicious, relentless, tech-driven war on human rights. Little Brother was a bet that these would not get better on their own.

And it was a bet that tales of seizing the means of computation would inspire people to take up digital arms of their own. It worked. Hundreds of cryptographers, security experts, cyberlawyers, etc have told me that Little Brother started them on their paths.

ATTACK SURFACE – a technothriller about racial injustice, police brutality, high-tech turnkey totalitarianism, mass protests and mass surveillance – was written between May 2016 and Nov 2018, before the current uprisings and the tech worker walkouts.

But just as with Little Brother, the seeds of the current situation were all around us in 2016, and if Little Brother inspired a cohort of digital activists, I hope Attack Surface will give a much-needed push to a group of techies (currently) on the wrong side of history.

As I learned from Little Brother, there is something powerful about technologically rigorous thrillers about struggles for justice – stories that marry excitement, praxis and ethics. Of all my career achievements, the people I’ve reached this way matter the most.

Speaking of careers and ethics. As you probably know, I hate DRM with the heat of 10000 suns: it is a security/privacy nightmare, a monopolist’s best friend, and a gross insult to human rights. As you may also know, Audible will not carry any audiobooks unless they have DRM.

Audible is Amazon’s audiobook division, a monopolist with a total stranglehold on the audiobook market. Audiobooks currently account for almost as much revenue as hardcovers, and if you don’t sell on Audible, you sacrifice about 95% of that income.

That’s a decision I’ve made, and it means that publishers are no longer willing to pay for my audiobook rights (who can blame them?). According to my agent, living my principles this way has cost me enough to have paid off my mortgage and maybe funding my retirement.

I’ve tried a lot of tactics to get around Audible; selling through the indies (libro.fm, downpour.com, etc), through Google Play, and through my own shop (craphound.com/shop).

I appreciate the support there but it’s a tiny fraction of what I’m giving up – both in terms of dollars and reach – by refusing to lock my books (and my readers) (that’s you) to Amazon’s platform for all eternity with Audible DRM.

Which brings me to this audiobook.

Look, this is a great audiobook. I hired Amber Benson (a brilliant writer and actor who played Tara on Buffy), Skyboat Media and director Cassandra de Cuir, and Wryneck Studios, and we produced a 15h long, unabridged masterpiece.

It’s done. It’s wild. I can’t stop listening to it. It drops on Oct 13, with the print/ebook edition.

But! You can get it for a mere $20 via my first Kickstarter.

What’s more, you can pre-order the ebook – and also buy the previous ebooks and audiobooks (read by Wil Wheaton and Kirby Heyborne) – all DRM free, all free of license “agreements.”

The deal is: “You bought it, you own it, don’t violate copyright law and we’re good.”

And here’s the groundbreaking part. For this Kickstarter, I’m the retailer. If you pre-order the ebook from my KS, I get the 30% that would otherwise go to Jeff Bezos – and I get the 25% that is the standard ebook royalty.

This is a first-of-its-kind experiment in letting authors, agents, readers and a major publisher deal directly with one another in a transaction that completely sidesteps the monopolists who have profited so handsomely during this crisis.

It aims to radicalize a generation of tech workers while entertaining its audience as a cracking, technologically rigorous thriller

The audiobook is amazing, read by the fantastic Amber Benson

If you pre-order through the Kickstarter:

You get a cheaper price than you’ll get anywhere else

You get a DRM- and EULA-free purchase

If you’ve ever enjoyed my work and wondered how you could pay me back: this is it. This is the thing. Do this, and you will help me artistically, professionally, politically, and (ofc) financially. 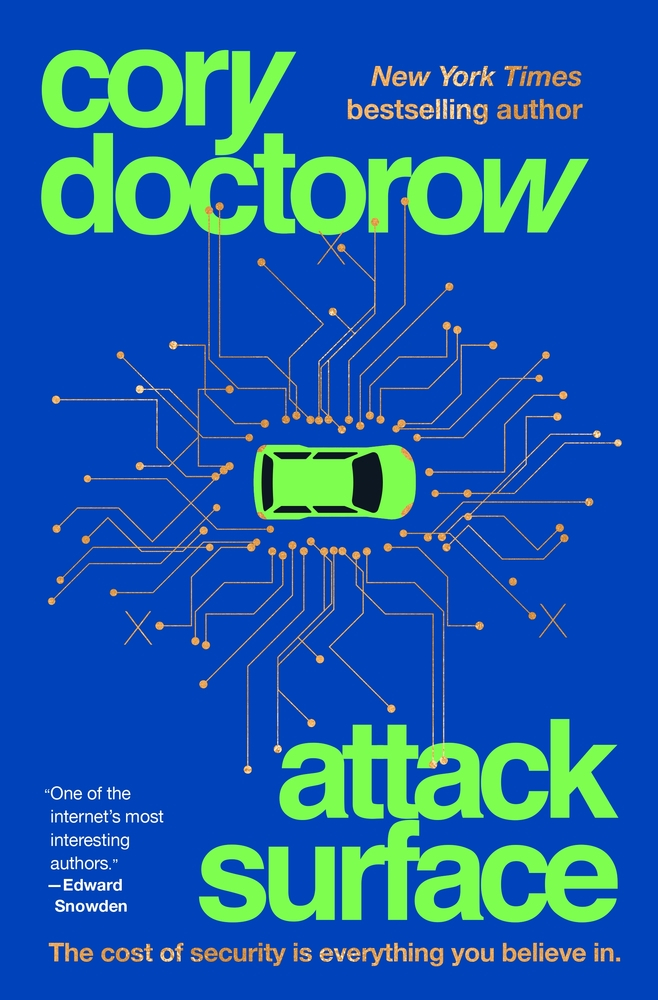